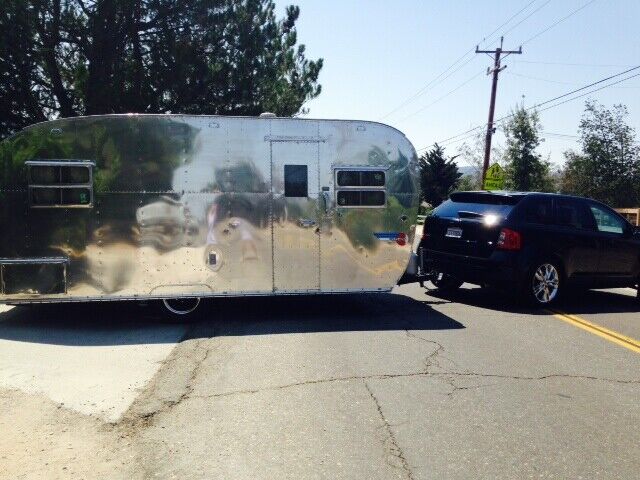 This rare, outstanding original condition (even the original furniture tag is attached to the fabric) 1954 Boles-Aero was featured in the November 2013 issue of Trailer Life magazine. Sleeps 4, weighs 3,040 pounds and pulls like a dream. The curtains are new and the Boles-Aero logo was professionally hand-painted on the sides. The range, oven, refrigerator, heater and toilet (no shower) all work well. It has a canopy and exterior window shades. The trailer is registered with a vintage California “Black” license plate. We also have a NOS 1954 (YOM) California Trailer license plate. We’ve had the Boles since August 2014 and, unfortunately, have only had her on the road three times – two nights in Napa, two nights in Grass Valley and two nights on the California coast. Its time for a polishing and a new family; one that will appreciate the trailer as much as we do but will get it on the road much more than we did. ABOUT BOLES-AERO In 1939, Don Boles, an enthusiastic young southern Californian, was one of the first thirty-seven candidates chosen for a new four-year tool and die apprenticeship program being initiated by the US Department of Labor under President Rooseveltâs plan to assist in bringing the country out of the effects of the Great Depression. He was assigned to work and study at the Lockheed Aircraft Company plant in Burbank, California, where he learned all aspects of aircraft design and construction and how to build tools and component parts. During his time in the program, he earned a number of awards for designing and building various tools to enhance the way in which aluminum parts were fabricated. Following graduation from the apprenticeship program in 1943, and a brief assignment in Cleveland, Ohio, for General Electric Company, he enlisted in the US Navy for the duration of World War II. Following boot camp, he was stationed at a military base in Norman, Oklahoma, and, unable to find available housing for his wife and 3 children, he purchased a used 27-foot trailer to be their home while he served his stint in the Navy. When he was released from the Navy following VJ Day, he hooked up his trailer and the family took a traveling vacation on their way back to California. When they arrived at their California home, he parked the trailer in his driveway with a âFor Saleâ sign on it. That very day, the first lookers bought it and actually at a profit for the Boles, but several other customers continued to stop by to attempt to purchase it. Boles quickly recognized the post-war pent-up demand for good trailers so, while reemployed at his civilian job, he began, with his aircraft training, to design an all-riveted, lightweight, all-aluminum top-quality trailer. With financial help and moral support from his father, he began to build his first trailer in his single car garage while they searched for a factory site. The residential garage-manufacturing site limited the size of the first trailers to only nine and one half feet in length. They quickly found an available and affordable site and began construction of their trailer factory. Don Boles took full control of the company changing the name to Boles Manufacturing and then renaming the trailer the Boles Aero. Thanks for your interest.