Class A RV for sale in Longview, Texas 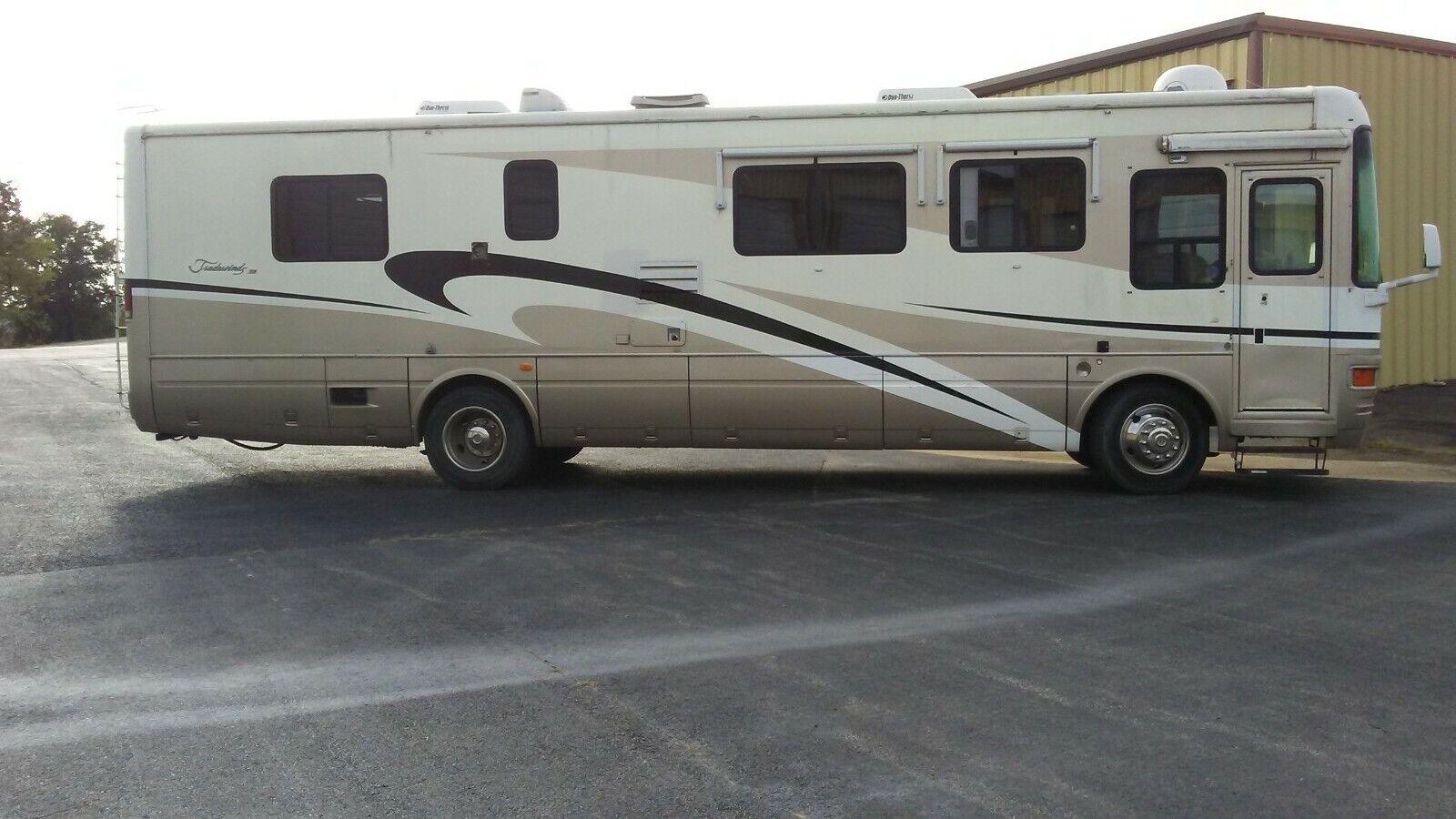 For sale is a 2003 National RV Tradewinds LE M374 motorhome on a Spartan chassis.Runs and Drives.Caterpillar 3126 330hp turbodiesel straight six motor.Allison six speed automatic transmission.Onan QD7500 diesel generator.No rust except the water tank support (see below).This “Spartan” frame is the upgraded frame, with independent front suspension.Air bags inflate and hold air.Has the optional bedroom slide out.Four new batteries (2 house and 2 start batteries).Includes a trailer hitch.All hatches have working struts and working locks. It was a repo that I bought from an auction, so the title is Salvage and the mileage is “Exempt”, though we believe the 39,000 miles on the odometer. It seems the unit was lived in but not driven much so the interior shows wear but the drivetrain seems flawless. I just gave it fresh oil & filters. I live in California and bought it in Texas in April, where it currently resides in a storage yard. I had to return to California for business and have concluded I don’t have the bandwidth to fix it up, so I’m selling. Issues are below. Issues:Roof shows signs of water leakage.Several appliances are non-functional: Water heater and refrigerator are partially disassembled. Has space for the optional washer/dryer but no unit there. Both roof air conditioners turn on but neither making cold air. Dashboard air conditioner has a leak and won’t hold refrigerant.Water system shows signs of leakage that rotted the tank’s support rails, but this has not affected the vehicle frame rails, which show no corrosion.Rear jacks work but front jacks do not respond to controller inputs (I assume it’s an electrical issue).Rear slide out works but the motor, which is included, isn’t mounted, so for now you must use the crank. The front slide out didn’t seem to emerge evenly, so I didn’t extend, though the motor works.I didn’t attempt to work the water because of the system leak, so not sure about faucet/shower/toilet.Alternator: I’m not familiar with these systems but it didn’t give the voltage I expected, so I drove it with the generator operating.No mattress.One of the external hatch doors is missing (see photo).The entry door lock is broken, though it does latch and stays closed. I believe the previous owner was disabled, so there were a few modifications for accessibility:Carpet has been removed and isn’t included.One of the two bedroom sliding doors has been removed and isn’t included.The passenger captains chairs are present but not mounted. If you don’t want to pick up immediately, you can buy it and then assume the storage tab of $74/mo until you’re ready. NADA book value is $35,560Probably $15K in component value (engine, trans, generator).I’m offering as a no-reserve auction with a low starting price. I’m going to let the auction run to establish value, so please NO BUY-IT-NOW OFFERS or requests.