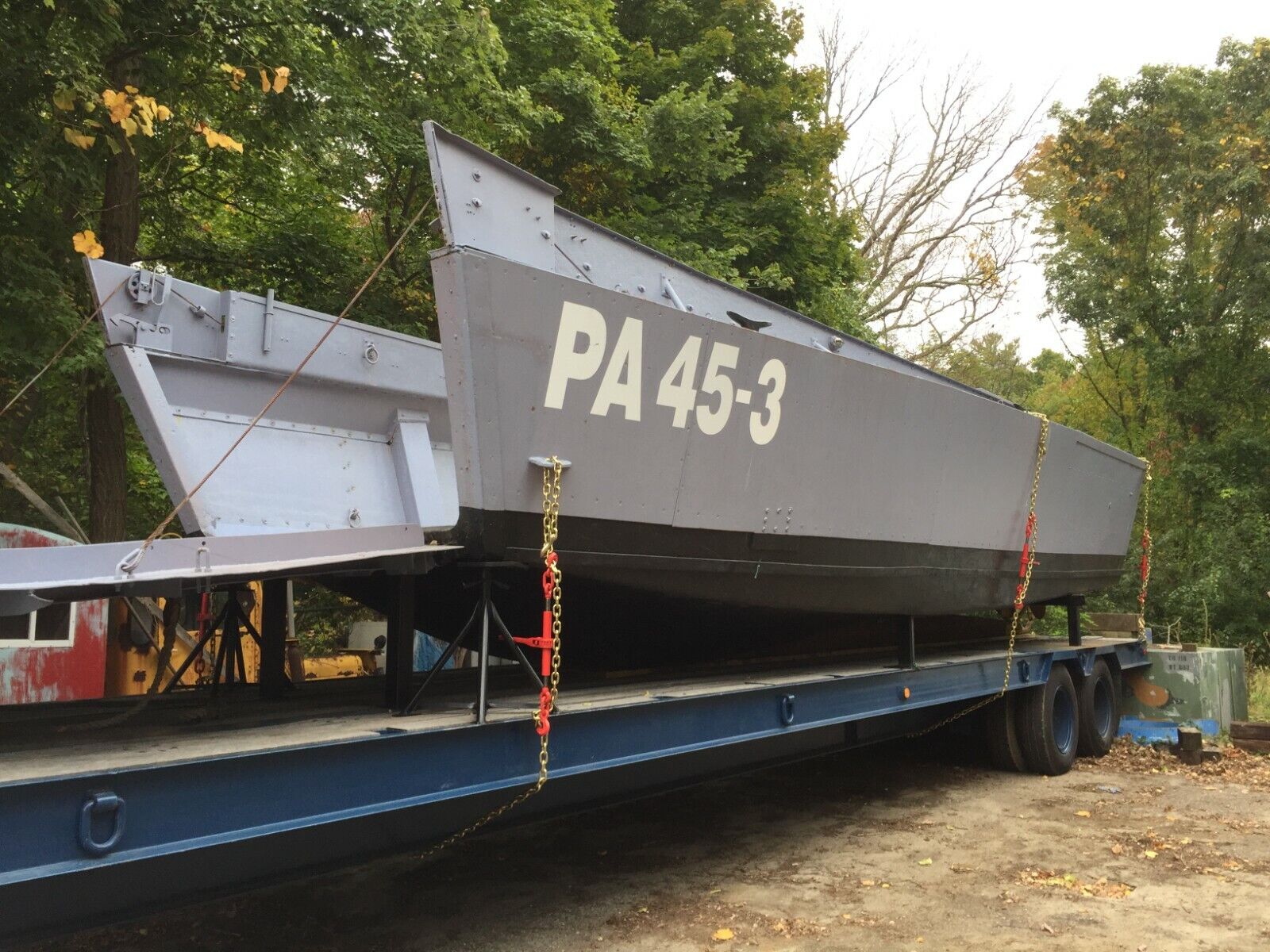 Do you want to see more pictures of this boat? Click Here

The LCVP (Landing Craft-Vehicles and Personnel) is a Vietnam-era version of the famed WWII ‘Higgins Boat’. These later vessels featured a fiberglass hull, although the dimensions remain the same. One of her sister ships was used extensively in the film âSaving Private Ryanâ. For the filming, dozens of fake rivets were glued to the outside of the hull to represent the earlier design. The LCVP features a 36 foot by 10.5 foot barge hull with a capacity of about 8000 lb of cargo. A winch lowers and raises the front ramp, which measures about 7.5â x 7â. This boat has a functioning engine and transmission but does need some work before she can be put back in the water. (See below). The head of the Boat Inventory Management Department of NAVSEAâs Combatant Craft section at Little Creek VA was able to confirm that our LCVP was a Mark 7, one of 112 built for the Navy as part of the Vietnam buildup in 1965. Unfortunately, her service records were either lost or destroyed. (Interestingly enough, internet inventory records list her as scrapped.) We do know that the power reduction unit for the stern drive was built by Gray Machine and is dated August 21, 1964. The Detroit Diesel marine engine, type 6-71N (serial number 67187267) was rebuilt in Norfolk Naval Shipyard in March 1976. Sometime between 1976 and 1979 this LCVP was surplused to the State of RI. The first record we have of a Rhode Island registration is dated October 1979. On the boat registration certificate the hull number is 36VP6514–the same number that is on the transom. The registration confirms the 1965 manufacturing date. Rhode Island Department of Environmental Management used the LCVP for several years to ferry staff, equipment, and supplies to and from Prudence Island in Narragansett Bay. It was deactivated and put up on blocks on the island. Learning of its existence, our non-profit project petitioned DEM to donate the vessel. This transfer was perfected in 2001, and proof of ownership is in the form of a transfer of title from the RI Department of Environmental Management to our sister non-profit, USS Saratoga Museum Foundation, Inc. The boat’s last in-water registration expired in 2003. (See scans.) Over the next few years Instructors and students at a local Career and Technical Center repaired the hull, cleaned the diesel engine and removed a pilot house, which had been added by DEM. A team of volunteers stripped, sanded and painted the hull, restoring its appearance to its time in naval service. As can be seen in the attached photos, the LCVP has been featured in a number of local parades. The engine turns over today. However, the fuel system needs to be overhauled, along with the hydraulic steering. We have two good fuel tanks, but the plumbing, valves and exhaust need to be reinstalled. In order to be put back into running condition, the boat needs throttle and electrical controls as well as gauges. The waterproof integrity of the hull has not been tested in recent years. During the time the LCVP was stored on blocks, small holes were cut in the fiberglass near the keel for drainage, and these need to be sealed. Some leaks in the ramp gasket must be repaired as well. LCVP is available for inspection in North Kingstown, RI. It is currently mounted on a flatbed trailer, which may be BORROWED by buyer to transport LCVP to buyer’s location. Buyer must pay deposit for trailer and arrange for its return. Boat is being sold as is in order to raise immediate cash to support the construction of a prefab steel hangar for the RI Aviation Hall of Fame. However, this is NOT A FIRE SALE, and if necessary we will make the LCVP seaworthy if we cannot get an acceptable as-is price. For reference, one stripped-down workboat version is listed at $39,000 in the Bahamas, and another fully operational (albeit heavily modified) workboat in Maine is for sale for $75,000.